One of the companies doing its bit to combat climate change is Betolar Plc, a pioneering Finnish materials-technology company with huge global market potential. The company replaces cement, used as raw material for concrete, with a sustainable side-stream-based material – helping the construction industry reduce carbon-dioxide emissions. The carbon footprint of Betolar’s new low-carbon construction materials is up to 80% smaller than that of traditional materials. Extensive IP protection has played a key role in the company’s growth.

The idea for Betolar came from a house building project

A few years ago, Juha Leppänen from the Kannonkoski region of Finland became concerned about the emissions caused by the production of cement. He also wanted to establish a company of his own as he saw it as the best way to also receive funding for the construction of his new house.

While building the house, he familiarized himself with various grades of concrete – the most widely used building material in the world. His previous house had to be burnt down because of the presence of mould. Leppänen was brought face to face with the problem of how to finance his new home.

During construction, Leppänen tried various types of special concrete and realized they had great potential. He decided to start making different types of concrete furniture and garden-path paving slabs. As it became clear that the products were going to sell surprisingly well, the process took off quickly.

“I took a risk and a big loan, arranged production facilities and designed the machinery and production lines. With my first employee, we began making special concrete that same winter. The aim was to employ ourselves from then on,” says Leppänen.

Things seemed to develop favorably. Soon after starting production, Leppänen got considerable funding from Ari Salmivuori, owner of investment company Ajanta. Salmivuori had become interested in Leppänen’s company Kalustebetoni when he saw its stand at a housing fair.

The two met the next day and agreed to start cooperation. The company’s intention was to focus on concrete furniture products, and production made rapid progress in the autumn of 2017. However, Leppänen didn’t settle for just that and wanted to further develop the production of sustainable concrete products.

Sustainable solution found in the ashes 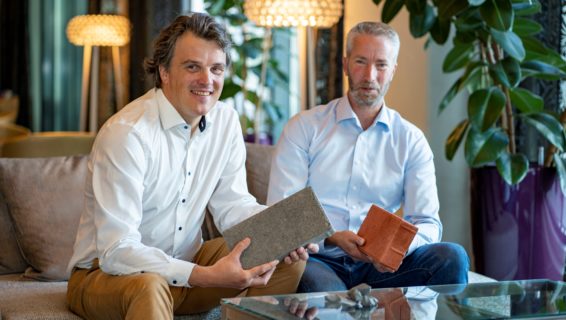 Leppänen tested bigger and bigger modifications to the blend components. He tried to harden concrete with a new technology involving no cement at all. As the concrete hardened in two hours and Leppänen realized his test had succeeded, he decided to call Salmivuori.

“He asked if we should take the risk. I was quiet for a minute and then said yeah, let’s take the risk,” says Leppänen.

Taking the risk meant stopping the production they had just started, and focusing on product development. The decision seemed a bit crazy to Leppänen, as the process had just got rolling and it looked like there was ongoing demand for the products.

In 2018, the company changed its name from Kalustebetoni Oy to Betolar Oy. The same year they also launched a circular-economy solution that reduces waste problems and saves virgin raw materials in the production of concrete.

In short, the business idea behind Betolar is very simple: to turn waste into valuable material. This idea has been developed to this day, with about 400 different industrial side-stream materials having been analyzed for chemical characteristics and combinations. These materials are now included in Betolar’s data bank.

Innovation-driven companies often share the same positive problem. When you have a lot of good ideas on the table, only some of them make their way to production.

“Sometimes you have to make quite cold-hearted decisions about what to focus on in order to get to the commercial stage. There’s a certain pain to it when you’re forced to leave very good ideas on the shelf. Fortunately, our most important guesses have turned out to be right, and we’ve been able to make progress,” says Betolar’s CEO Matti Löppönen, adding that progress is not always straightforward, despite the company’s fast growth.

Betolar’s philosophy is based on the following premises: the solutions should always bring large-scale benefits to the customer, they must work on an industrial scale, the prices must be competitive, and the positive environmental impact must be high.

A strong IP portfolio gives credibility to the company

Leppänen stresses the importance of innovations and IP to Betolar. The company has built a diverse patent and trademark portfolio, with Papula-Nevinpat helping to protect the technology developed by the company for creating and manufacturing construction materials.

“Especially in the beginning, when a small startup sets out to protect different innovations, it’s a credibility factor that you also have something of your own. It’s very important to financiers,” says Leppänen.

“IP creates essential value for this type of company. At the same time, it also predicts the creation of the company’s value in the future. We are very well able to ensure that the company’s property stays in our possession. That’s what’s essential in it,” Löppönen adds.

As European Patent Attorney Jukka Korhonen from Papula-Nevinpat points out, Betolar’s case is a good example of the fact that often the strongest protection is achieved with a combination of non-disclosure and concrete forms of protection.

“That way the total palette becomes sufficiently strong. It means not filing for patents carelessly, for things you’ll not be able to enforce. In other words, not disclosing the invention by the patent and as a result helping competitors,” Korhonen explains.

Korhonen says that protecting materials technology does not differ from protecting machines or devices, for instance, even though the nature of the inventions and the way in which they are defined in the patent application are different. If something new is being developed, it’s worth considering protecting it by applying for a patent. For Betolar, one important motive for protecting IP has also been licensing to other companies in the field.

CEO Löppönen says that one of Betolar’s strengths is a credibly managed IP strategy and protection. The company is especially pleased with the wide range of areas of expertise and prompt action offered by Papula-Nevinpat’s IP experts.

“It’s important that a patent attorney combines both practical understanding and a wide knowledge of many different subjects, so we’re able to speak the same language.”

Betolar’s patent applications have been very successful, with an acceptance rate of close to 100%. So far just one patent has been withdrawn. It’s no wonder Betolar is very happy to work with Papula-Nevinpat.

“We’ve been looking for partners in other business areas as well, but it’s not self-evident that you find the best possible one. We’ve got a feeling that Papula-Nevinpat meets the criteria you can ask of an excellent partner,” Löppönen says, giving special thanks to European Patent Attorneys Timo Kuosmanen and Jukka Korhonen, who have been building Betolar’s patent and trademark portfolio.

As trademark protection is essential in order to build a strong brand and create value for it, Betolar has also registered the company logo and its Geoprime® solution.