Quantum-computing provider IQM aims to be Europe’s leader in the field. The company’s strength lies in raw R&D brain power, leading-edge technology, and a growing patent portfolio that Papula-Nevinpat is helping to protect.

The computer this article was written upon runs on strings of binary digits (or bits): the integers 0 and 1 arranged in varying ways to form units of information. Bits are always either zero or one – they cannot be both at the same time.

A leading role for Europe

Like many quantum-computing companies, IQM has its roots in academia and government-funded research. Several of the company’s founders and a number of its employees have been part of the quantum-computing research group at Finland’s Aalto University. Today, IQM has 60 of the brightest minds in the field working out of offices in Helsinki and Munich.

“There are relatively few people in the world with quantum-computing skills, but we have been able to recruit a really top team,” says IQM’s Chief Operating Officer and Co-Founder, Dr. Juha Vartiainen. “Our aim is to build a pan-European quantum-tech company and extend partnerships with universities and research teams all over Europe. Our initial customers are governments and national research organisations, so there is lots of technical and business complexity involved.”

As quantum computers can become extremely powerful, a lot of the technology around them has traditionally been controlled by governments. In the United States, some quantum-computing companies face restrictions on exporting the actual quantum hardware and can only offer the technology as a cloud service. It’s not infeasible to think of a quantum computer breaking encryption codes, for example, which would severely affect internet traffic and could disrupt many of the smart technologies that are increasingly part of our lives. Hence, the industry has a history of tight cooperation between the public and private sectors.

“At IQM, we have accumulated more than a decade of patented R&D from Aalto University and the VTT Technical Research Centre of Finland. These technologies will enable us to reach quantum advantage sooner,” says Dr. Kuan Yen Tan, IQM’s Chief Technology Officer and Co-Founder. “This emphasizes the importance of R&D and IPR protection as the currency of this deep-tech industry.”

One of the ways IQM sets itself apart from other quantum-computer makers is by developing application-specific processors for different use cases and industries.

In the field of chemistry, for example, this means being able to simulate specific phenomena that help with drug discovery, or that can aid the development of new types of materials and the processes by which they’re made. The field of pathfinding – critical for self-driving vehicles – is also emerging as an important area. Quantum computing can be applied to finance too, helping with portfolio optimisation and scenario prediction.

“The most straightforward applications of quantum-computing concern the simulation of systems and the resolution of problems grounded in clear quantum-mechanical phenomena, such as finding the equilibrium state of a molecule,” says de Vega. “But today we know that quantum computers are very good at simulating classical systems and processes too.”

“Take the Black-Scholes financial model, for example. Although the process it describes is not intrinsically quantum mechanical, the simulation of the equation may be much more efficient with a quantum computer than with a traditional computer,” she says.

“Another example is modelling the perfect network for solar cells, both optimising sunlight and taking into consideration that you need to transport and store the energy. This is an optimisation scenario where there are no quantum-mechanical effects involved, but it may be very efficiently described with quantum computers.” 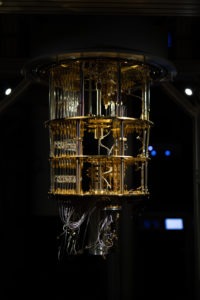 Quantum computer from inside. Photo: IQM

The computers themselves are highly sensitive and need to be operated under tightly-controlled conditions. If not well shielded, interference can be introduced by people in the room, furniture being moved, or even a train rumbling deep underground.

To preserve their quantum state, the qubits need to be kept at a temperature as close as possible to absolute zero on the Kelvin scale: minus 273 degrees Celsius. This is done by placing them in a cryostat that cools the whole circuit down. Low temperatures are also essential for superconductivity – the physical property required to operate the electrical quantum circuits.

“The computer’s cables bring thermal noise into the qubits, so you need to be very careful about how you introduce the readout signals from outside so as not to warm them up. They need to be at ultracold temperatures in order to behave quantum mechanically,” says de Vega. “Just half a degree warmer than absolute zero would compromise the functioning of the machine.”

A calm but complex IPR landscape

As the industry is fairly nascent – only recently emerging from academia – the intellectual-property landscape (IPR) is still relatively peaceful. As of now, there are none of the prolonged patent wars we see in adjacent industries. Instead, the various players in quantum computing are quietly generating IPR, filing patent claims, and playing a wait-and-see game while the industry grows to everyone’s mutual advantage.

IQM’s main point of contact at Papula-Nevinpat is European patent attorney Matti Brax. He holds a degree in physics and has more than 25 years of experience working with patents.

“This is an extremely international field of technology,” says Brax. “So when a company like IQM applies for patents, they must do so on a much wider scale and in many more jurisdictions than some of our other clients.”

“What we are seeing is that companies in the field are filing patent applications for very basic principle technical discoveries, trying to make reservations for themselves that are as wide as possible,” he says. “A good patent attorney should always try to widen the scope of the patent application to include the general principle behind a specific invention.”

One of the IPR challenges is that there are few precedents upon which to base patent applications. Traditionally, when such applications are examined, they are compared to previous work in the field to scope the appropriate level of protection. This is not always possible with quantum-computing patents, as the IPR landscape is so new.

“The majority of the most important inventions in this field have come within the past five years, which is typically the amount of time it takes for a patent to be granted,” says Brax. “On top of that, every patent application in the world is kept secret for 18 months from filing, so at the moment none of the players in the field know much about what the others are up to.”

“For now, it’s about growing and learning, with all quantum-computing companies trying to preserve as much technological freedom and space as possible,” he says. “Nobody knows yet which patents will be the big money makers in this industry, so all the companies are investing as widely as they can afford to. Once the winning IPR emerges, that’s when things will start to get really interesting in terms of patent battles. This is really only the beginning.”