Leds are reshaping the future of lightning – and intellectual property rights

Our possibilities of illuminating built environment are currently undergoing a massive change: The incandescent light bulbs have been banned, the pale energy-saving lamps were just a short phase – and we’re all thankful for that! – and most, if not all, of our illumination will be made with leds. This process that’s sweeping the lighting industry is also keeping IP experts busy.

We have zillions of old but still working light fixtures, which are designed to be used with the normal screw-base light bulb or fluorescent tube. As renewing all of them would take quite a long time, the manufacturers are offering us retrofits, screw-base bulbs or long tubes with two pins at each end, but with modern leds inside. As we know it, a light fixture just has to have a bulb or a tube you can remove and replace after a certain time.

But this universal truth is now going to change irreversibly with the introduction of leds. As a light source, the led is so durable that consumers are more likely to renew their entire decor before having to replace a led light for a technical reason. That’s why the new fixtures are no more built with such replaceable light source at all, but the leds are placed in an integrated led module within the fixture. While technically it could be possible to replace the led module with a new one, for the average consumer this may not be feasible.

First of all, the designing of light fixtures will be fundamentally transformed. No longer do the designers need to struggle with the practical limitations of equipping fixtures with a standard-size socket, or ensuring that the light source in the lighting fixture can be safely accessed for replacing it. Also, the voltage required by the leds is so small that the old minimum distances and insulation thicknesses need no longer be observed. Light can be produced by points and lines forming any imaginable patterns.

And it’s not even necessary anymore that light comes from a separate “light fixture” device designed specifically for this purpose, as light sources may now be part of any other structures, and illumination can be designed to come even from unexpected places. These implications of the leds on light fixture and lighting design will undoubtedly encourage manufactures to actively protect their new products by registering their designs.

As the electronics in led fixtures is nothing like we’ve known before, the electronic manufactures are finding themselves in a fierce patent arms race. For two decades now, they have been bulking up their led patent portfolios with such enthusiasm it almost compares to smartphone manufactures, and their motives are obvious. Landing a plane at night in a large city gives a sense of perspective – those countless spots of light will all be replaced with leds! You don’t have to collect much of a royalty from a new light fixture or a retrofit to make your register ring. There are few fields of business that can be as confident on the growth of volumes as the led lighting business.

Due to all of this, things got a bit out of hand. Large manufacturers have been expanding their patent portfolios by product development and acquisitions with basic patents from a time when led technology was still young, and it wasn’t easy to find prior art publications to refuse the patentability of led applications, even if the claimed invention was an obvious modification of an existing technique. This resembles the early days of software patenting when you could insist that any completely normal procedure is new, just by writing in the patent claims that it’s implemented by a computer.

There are well-known patents in which the use of a led is the only difference from a prior technology using another light source, for instance a fluorescent tube. When challenged in opposition or appeal proceedings, the patent holders have many times successfully defended their patents by arguing that at the time of filing the application, the current leds were so dim and undeveloped that their use in illumination as described in the invention was in no way obvious for a person skilled in the art.

For example, creating white light with a tunable color temperature by means of leds has been considered patentable by the European Patent Office, even though the prior art discloses how to do the same thing with a fluorescent tube. Ironically, the current owner, and the most ardent defender, of this patent was originally one of the three parties who filed an opposition against it, loudly insisting that such ridiculously obvious travesty of a patent should be revoked without delay. Apparently, acquiring the patent did not come without also acquiring completely new opinions and a set of alternative facts to support them.

The trust that the entire patent system enjoys is dependent on how fair do the companies see the way patents benefit their owners.  The  lighting industry should now keep the business hot while maintaining a cool head, especially when it comes to IP. The mistakes that once made software patents a target of general contempt should not be repeated with led patents. True innovations deserve to be given all that value and opportunities for commercialization the IP system was originally built for.

Let’s not risk the value of intellectual property rights earned on good grounds, or the credibility of the IP system as a whole, by letting anyone pretend that obvious solutions could be considered innovations. Just replacing an old lamp with a led makes no patentable invention – not even when such a claim is being presented by the biggest electricity company in Europe.

An innovation is patentable if it’s:

You may also want to consider how you’re going to exploit your patent in business, and whether there might be others who’d be interested in using your invention. 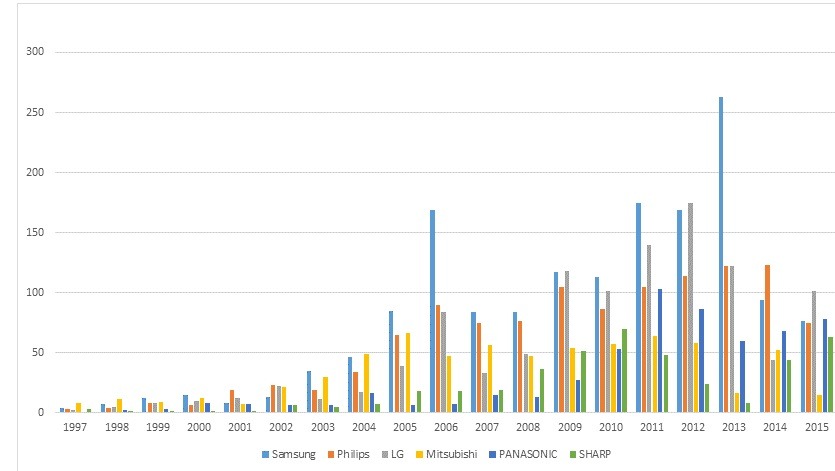 Patent class H05B-33, the top 5 filers: The chart illustrates how the number of patent applications filed for LED lighting 20 years ago was practically nil, and has ever since risen up to a point where major filers submitted a new patent application every three days (in 2013 Samsung actually filed one application for each workday). 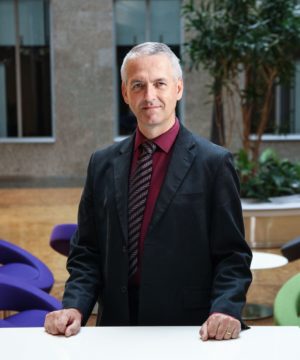 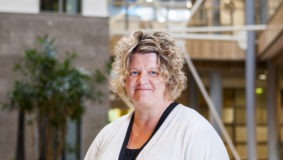