Patents in Russia, Eurasia, and the CIS countries

In the Russian Federation and CIS countries, intellectual property (IP) rights have to be registered in order to be enforceable. The national Patent Offices grant patents, industrial designs and register trademarks. Generally, the requirements for registration are similar to those of Western jurisdictions. In certain countries, such as Russia, Belarus, and the Ukraine, it is also possible to register a utility model.

The Russian IP legislation has seen several major reformations since the first patent and trademark laws came into force in the early nineties. Improved legislation, the WTO membership and the IP Court, operating in Moscow since 2013, strengthen the position of IP right holders in Russia. The Russian Patent Office conducts an independent substantive examination of patent applications in order to assess their novelty and inventiveness. Since 1 January 2015, the novelty of Russian utility models is also being examined.

Russia, Belarus, Kazakhstan, Azerbaijan, Kyrgyzstan, Armenia, Tajikistan and Turkmenistan are members of the Eurasian Patent Convention (EAPC). The EAPC provides a single, harmonized prosecution procedure in one language (Russian) before the Eurasian Patent Office located in Moscow. A granted Eurasian patent has the same effect as a national patent, and it is kept in force in the EAPC member states chosen by the applicant by paying annuity fees to the Eurasian Patent Office. There are neither validation fees nor requirements to translate the claims into any other language than Russian. In general, the Eurasian procedure is more cost efficient if patent protection is sought in at least two individual member states.

Moldova is no longer party to the Eurasian Patent Convention, but the Eurasian Patent Office continues to handle appeals, annuity payments, registrations of assignments and other legal matters concerning Eurasian patents in force in Moldova or Eurasian applications having an international filing date before 26 April 2012.

Ukraine, Georgia and Uzbekistan are not parties to the Eurasian Patent Convention, and currently the only possible course of seeking patent protection in these countries is through a national application.

Eurasian Economic Union – patents, trademarks and customs
Benefits and challenges of the EAEU 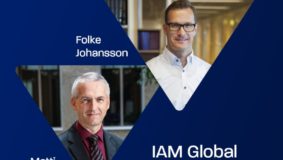 Papula-Nevinpat is delighted to announce that Matti Brax and Folke Johansson have been named in IAM Global Leaders 2023 which lists the world’s top private practice experts in the field of patents.